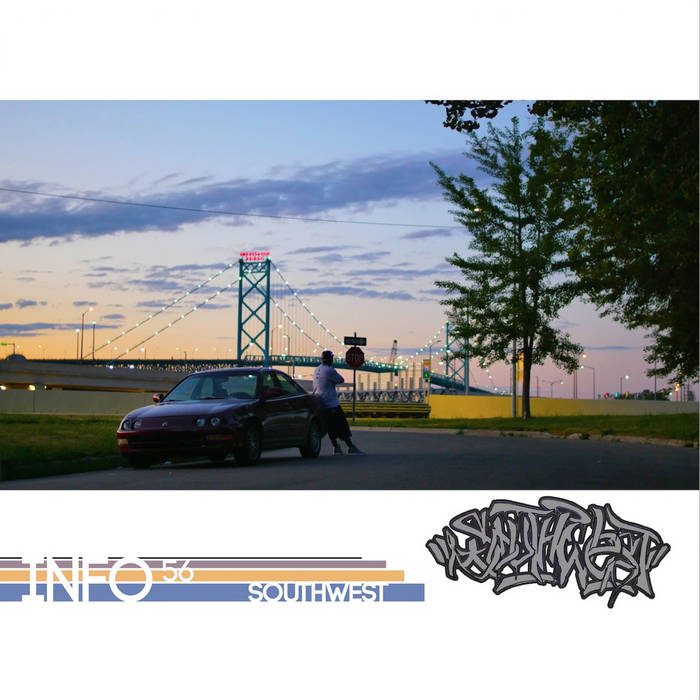 Producer and MC Info arrives with his instrumental debut Southwest, a 40-minute journey into the sound and emotion of his part of Detroit, experienced through his eyes and ears. A combination of funk, soul, boom-bap, Detroit slap, and the unclassifiable are all cooked up into a hand-crafted audio experience. The entirety of Southwest finds Info effortlessly jumping between genres from track to track, always sounding squarely in his own lane with his own touch.

Born in Houston but raised in Southwest Detroit, Info brings his unique perspective and background into every piece of music he lays his hands on. Although he has been both emceeing and producing since his teenage years, on this project he lets his production be the voice, along with some select cuts by Detroit legend DJ Dez.

Beginning with arpeggiated synth work accompanied by on-point DJ Dez cuts, "Exit 47" serves as both an intro to this project and introduction to the Southwest Detroit neighborhood itself, even telling you where to exit if you should ever find yourself on i75. The eerie synth work, menacing bassline and haunting strings all pair together with an infectious melody to serve as reminders of the ugly beauty one finds in the southwest.

Not all is dark on this project, though. "Desvelado" carries a swing and a snare-smack which gives almost a sense of optimism, a reminder that even in restlessness there is strength. "Get High", as its title suggests, sounds like it could be used as a payday anthem for tokers everywhere. On this track, DJ Dez lends his skills, adding the right cuts at the right time but never overshadowing Info's sample chopping expertise and boom-bap drum programming. Concluding side B is "On My Way", one of the jazzier offerings on the tape, is almost begging for some smooth R&B crooning but is tastefully executed as an instrumental.

Southwest is a nod to the neighborhood that raised him but also a message for the future; A reminder that you won't get where you're headed if you don't know where you're from.

"The future of detroit hip hop, joining the ranks of many greats in true fashion continuing our soulful legacy, with his own ideas.. finding his own way in a society that says otherwise. ENJOY." dezandres(DJDEZ)

Quality music since 2005. Texas to Detroit to California and everywhere in between.